It’s a bit of an oxymoron, but we call this one the Walker Bicycle. 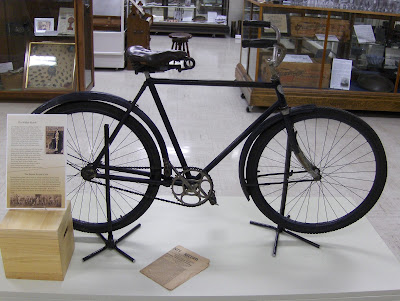 Our nickname for today’s artifact is in honour of the bike’s original owner, Herbert Walker, who purchased this Ivanhoe model bicycle in 1911. Ivanhoe model bicycles were manufactured by the Canada Cycle and Motor Company (CCM) in the early 1900s and Herbert was obviously a fan of their machines. He was not alone in his appreciation of this two-wheeled transportation.

Bicycles were a popular fad among younger men from the late 1800’s to the early 1900’s; they were lower maintenance than a horse and carriage and a much cheaper alternative than the motor cars that were beginning to appear around Kings County. Cycling was also an accepted mode of transportation for young women, offering them greater freedom in travel than previously enjoyed. Cycling became so popular that clubs and groups were formed for day trips and even overnight excursions. In Sussex, cycling enthusiasts formed the oh-so-Canadian "Beaver Bicycle Club". The group (and their bikes) are pictured here outside the Aberdeen Skating Rink, around 1896. The photo shows a variety of bicycle styles but the “Walker Bicycle” remains our firm favorite.

Herbert's Ivanhoe model cycle is a rather unique piece, retaining most of its original gear from its manufacture at CCM. The frame, handlebars and leather seat are all original but, most impressively, it still retains its wooden tire rims.

You heard it right, the tire rims were made of wood.

The wooden rims are one of our favorite features of this piece – right down to the patches and fabric tape that were added to repair the wood over the bike’s lifetime. The patches might suggest Herbert was careless with his bike but we don’t think so – they are the badges of honour of a much used machine.

Cyclist Herbert lived in Midland but he worked in Sussex at the Sussex Mercantile. Every day, he journeyed by bike to his work at the store, a distance of over 20 kilometers one way! The enterprising (and physically fit) Herbert then used the same bike to return home, delivering editions of the Kings County Record newspaper on his way. It’s no wonder Herbert’s wooden bike rims needed a little patching over time. These wheels were in constant motion.

Now, before you start to feel too sorry for Herbert and his epic rides to earn a living we should tell you that he also employed the bicycle for fun as he courted Kate Corbitt of Lower Millstream (a distance of 22 kilometers from his home). Apparently Kate also admired Herbert and his cycling skill; the two would later marry in 1914.

We're not sure if they upgraded to a bicycle-built-for-two.

A special thanks to Bill Consolvo of Darlings Island and his team at Consolvo Bikes for helping to restore this piece for exhibit back in 2013! They were so impressed with our fancy wheels that they displayed the bike in their shop for a special event they were hosting!
Posted by Quilt Barn Tour at 07:00