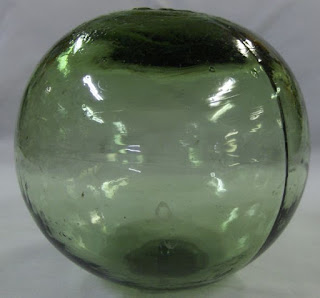 The glass fishing float featured in today’s post is the only one of its kind here at the Kings County Museum.
It's a wonderful example of a beautiful form for a tough function.

These nifty hollow glass floats are believed to have originated in Norway (some historians believe they were being produced in Norway as early as the 1700s, with a Norwegian merchant named Christopher Faye credited as the inventor). Regardless of the place of origin, once glass floats were invented they were quickly adopted by fishermen everywhere and could be found in every ocean in the world. By the 1840s the glass floats had replaced wood or cork floats used in the commercial fishing industry in most of Europe, Russia, North America and Japan – they were deemed better than wood floats because if the wood soaked up too much water they would become water-logged and eventually sink. The glass floats had no such trouble and could support large scale nets. An incredible feat for such a seemingly delicate object.

As they rose in popularity, fishermen experimented with glass float shapes and sizes. Some were very small and used for recreational fishing, others were fairly large, reaching diameters of 12 inches! Manufacturers experimented with float designs and one such experiment led to the production of floats with groove patterns in the glass so that it would be easier to attach line or netting around the sphere. Our sample has no such grooves; it would have been encased in a knitted net to allow it to be easily carried and connected to fishing nets.

Glass fishing floats came in a variety of different colors like amber, clear, amethyst and numerous shades of blue. The majority of glass floats that were produced in Japan were made of recycled sake bottles, producing the beautiful green shade seen in our example from the museum collection.

While only one sample has found its way to the Kings County Museum, there are still glass floats bobbing about in the ocean to this day. It is believed that there are quite a few caught in the currents of the North Pacific that just haven’t made it to shore. Some do occasionally make it to shore in one piece, quickly being gathered up as a precious treasure from the past. Most, however, are washed ashore as shattered pieces of sea glass. Like the glass floats they once came from, these broken treasures are beautiful and tough, surviving centuries of stormy seas to return to the shore once more.

Looking for a great family adventure? Visit one of New Brunswick’s many beautiful beaches and scout out some sea glass of your own! Or visit an incredible antiques shop like Bloomfield Treasures to see if you can find a complete glass float for your own collection.

Our thanks to summer staffer Jamie Pearson for today’s post!
Posted by Quilt Barn Tour at 07:00