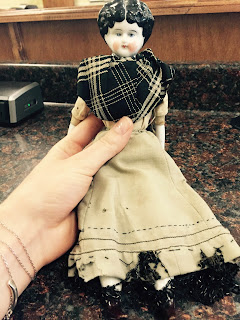 While looking through the museum collection for historic toys for a children’s workshop, we stumbled upon this more than a century old china doll.

This beauty was used by Ellen Huggard (b. 1865) and her sister Jane (b. 1871) in the early 1870s. The girls were two of the children of Richard and Mary (Neil) Huggard of Avonmore, Kings County and, despite their remote location, they had one of the top toys of the day.

The Huggard girls were on point with their china doll in 1870, as the china doll’s popularity was at its peak between 1840 and 1890. A seemingly long run for the popularity of a doll compared to today’s standards, but without mass catalogues, franchise toy stores, TV or the internet a toy could have a much longer run as a favorite in many households.

A china doll is a doll made either entirely or partially out of glazed porcelain; the glazing is what separates a china doll from a bisque doll. China dolls were predominantly produced in Germany between 1840 and 1940. 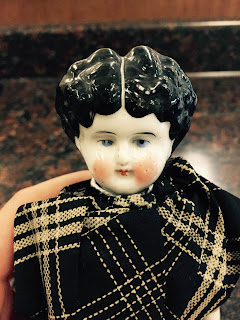 Our doll is a typical china doll with painted and molded hair, and a stuffed body made of cloth; but she also sports china arms and legs – slender, highly breakable items that make us nervous whenever it’s time to move ‘dolly’ about. The Huggard doll is also something of a rarity as it has black hair because these dolls were commonly made with blonde hair, and only occasionally brown or black.

An interesting observation we’ve made here at the museum is that we can usually guess the age of a visitor by their reaction to any of the dolls in our collection. Those who came of age around the “doll horror movie” craze of the 1970s and 1980s will always cringe when they see a doll from the collection; but those born before will always pause, tilt their heads to one side and whisper a soft, “Awwww” of admiration.

No matter a visitor’s age, or their attitude toward dolls, there is one phrase that we delight to hear spoken, time and again:

Not enough doll information for you? Check out these ‘dollmastery’ videos, https://www.theriaults.com/florences-videos, by Theriault’s, a leading doll auctioneer, which even features some dolls which resemble our china doll!

Special thanks to summer staffer Lydia Blois for writing today’s post (even though she was born in the post-doll horror film age!)
Posted by Quilt Barn Tour at 22:27