While reviewing boxes of artifacts to confirm that their location data was up to date, we came across some extremely weird and interesting pieces. The tooth extractor from a previous post was one such object that we stumbled upon, as were the old fashioned curling irons but not all of the artifacts that we found were terrifying! Some, like these small scissors, we classify as treasure. 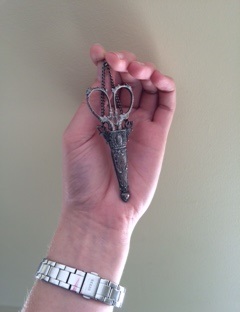 These rather fancy and petite scissors were used by women in area sewing groups during the early 1900s. Often used for needlework, these tiny tools allowed women to accomplish beautiful, delicate work - far beyond anything most people would imagine attempting by hand today!

Like many tools, scissors have a story that didn’t start out quite so flashy. Once upon a time all scissors simply resembled shears. It was in Sheffield, England that quality scissors began being produced for specific uses by the toolmakers in the steel producing region. Companies like John Rodgers & Sons were one of the first to produce scissors with gold plated handles in the shape of animals.

During the Victorian era, the handles on scissors became the focus with intricately carved designs and added materials like bone or mother of pearl. For style and perhaps protection the scissors were sold in protective fabric, leather cases or metal sheaths. Soon it wasn’t uncommon to give stylish scissors to someone as a very popular and affordable gift. 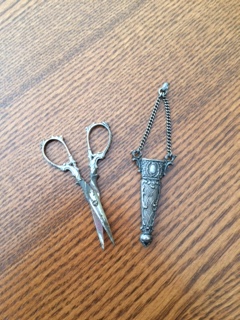 The sewing scissors we have in our possession have a metal sheath like one would have for a sword. There’s also a small chain attached to the sheath to allow the scissors to be hooked onto a sewing bag, or worn on a chain or cord around the neck, making the scissors a beautiful, yet functional accessory when attending sewing circle or out on calls (yes, even when visiting the neighbours ladies would take along their work basket so they could sew, darn socks, or any of the other necessary household tasks).

Admittedly, our sewing skills here at the museum are a bit lacking but we are certain that if we had been given the opportunity to use something like these scissors, we probably would have become masters of the art. And even if we didn’t, at least if we ran with these scissors they’d be too small to do too much damage!

Thank you to summer staffer Jamie Pearson for today's post!
Posted by Quilt Barn Tour at 11:02