Gaps in the Tooth

A few days ago in our post Smile we shared the story of our terrifying tooth extractor. As we learned, ‘tooth drawing’ was once viewed as a dreadful fate, an exercise in pain that you would not wish on your worst enemy. That’s what makes today’s quirky little piece that much more interesting – and a bit sinister. 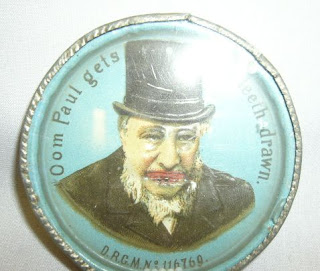 A quick glance at the toy reveals a rather ridiculous caricature figure with a gaping smile and a series of small white marbles rattling around the case. The object of the game is to get the marbles (aka teeth) back into that goofy smiling face. It’s a great little joke of a game but something about the piece made us pause and dig a bit further. As it turns out, the joke has a dark side.

We started by looking into the name of the caricature figure, Oom Paul, and discovered that this was the nickname for President Paul Kreuger, the leader of the Dutch Boers in the Transvaal at the time of the Boer War (1899-1902). Kreuger was affectionately known as Uncle Paul (Oom Paul) by the Boers and was often depicted in his top hat and abundant whiskers.

This game, however, is not intended as an affectionate tribute to Oom Paul; it was a toy sold in Britain as a satire of the enemy leader of the Boer forces in Africa. Knowing what we know about early tooth pulling, the game is clearly intended as a proper bit of menace. The threat of painful tooth-pulling that no one would wish on their worst enemy is clearly wished upon Britain’s worst enemy through the device of this 'humorous' toy.

Like this little artifact, the Boer War is an often overlooked bit of history. There is much to be learned, however, as the period holds many insights into the dramatic changes in warfare that would shape the First World War just a few years later. The Boer War marked the change of the rules of acceptable behaviour on the battlefield, and in the treatment of civilians, during wartime. It was a deadly precursor of modern conflicts – a terrible series of encounters where as many civilians were killed in the course of the conflict as were soldiers.

Perhaps it’s time we look more closely at the history of the Boer War and its legacy – and fill the gap tooth in the historical record.

Our thanks to the Museum of London and the National Army Museum for insight into this artifact.
Posted by Quilt Barn Tour at 07:00