PENNY FOR YOUR THOUGHTS?
The Kings County Museum has a small collection of coins, one of which is this 1864 New Brunswick  penny.
In 1860 New Brunswick officially switched from the British pound to the New Brunswick dollar as the currency of the province. It replaced the pound at a rate of 4 dollars = 1 pound (5 shillings = 1 dollar) and was equal to the "Canadian" dollar in use in Upper and Lower Canada (Ontario and Quebec). The New Brunswick dollar was replaced by the Canadian dollar at par when New Brunswick entered the Canadian Confederation in 1867.
The coins were only produced from 1861 until 1864 in ½ penny, 1 penny, 5, 10 and 20 cent. The 1/2 penny and 1 penny were cast in bronze while the rest were made of silver. Although the last coins were cast in 1864 they continued in circulation until the early 20th century.

If like me you are curious about language and where the "penny for your thoughts" phrase comes from, you can check out this link: https://blog.oxforddictionaries.com/2011/05/23/penny-for-your-thoughts/ 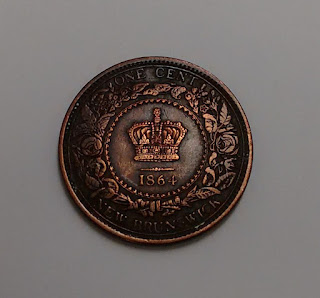 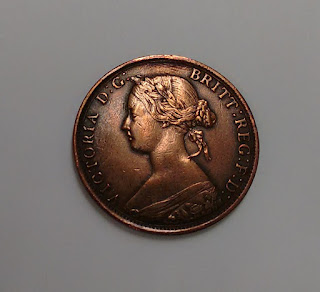