CHRISTMAS 1897
The Flewwelling Mill complex was the economic backbone of Hampton during the late 19th century. First established in 1862 by brothers Gilford and George Flewwelling, together with partners Gilbert White and Samuel White, by 1893 it employed 150. Gilbert Flewwelling died in 1897 at the age of 62. That December his "fellow workmen" were given a souvenir card with his portrait in remembrance of him.
Interestingly, the first Christmas Card was the brain-child of a British civil servant, Sir Henry Cole, who had helped set up the Penny Post three years earlier and was looking for ways to have more people use the service. 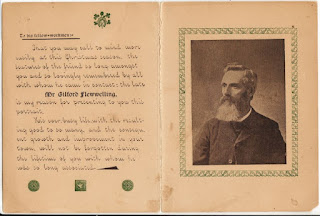