The Moose Didn't Get Loose

Dating from the early 1820s, this trunk has a special feature that is unlike many other trunks; it is covered in moose hide. The label on the inside cover reads: "Pound and Tasker, Trunk, Chest, Box and Packing Case Manufacturers, No. 81 Leadenhill Street, London. Funerals performed". 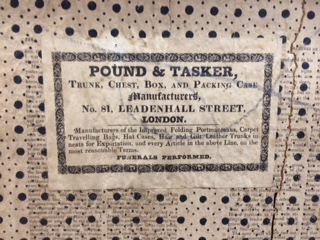 The company that began as Pound & Tasker manufactured trunks and packing cases and was originally started by Henry Pound, John’s father, who established the company in 1823 with his partner Mr. Tasker.  It wasn’t until 1857 when Mr. Tasker died that John joined the business with his father and the name was changed to Henry Pound & Son. 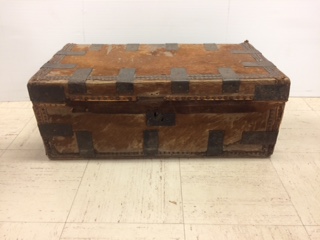 John took over following his father’s death and the business soon became known as the popular John Pound & Co continuing to manufacture luggage and luxury dressing cases. The business did extremely well under John’s supervision and it soon became one of the largest of its kind in England. By 1871 John Pound & Co. boasted three factories, eight distributing warehouses, and five shops in central London. John Lulham and Percy Albert, John Pound’s sons, eventually took over the business when John became too busy with his role as Lord Mayor of London in the early 1900s. 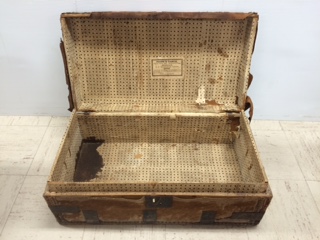 The label in the trunk still has the company name, Pound and Tasker. Assuming they changed the labels when the company name changed it is probable that this trunk was manufactured at the beginning of the company’s time when it was under the control of Henry Pound and Mr. Tasker. The old fashioned trunk is made of wood with iron handles on both sides and dotted newspaper lining the inside. The front has a latch and lock, making it possible to secure one’s belongings. Much of the moose fur has worn off along the sides and back of the trunk, but because it seems to sit under a lot of the leather detailing, it is likely that the trunk was made this way. 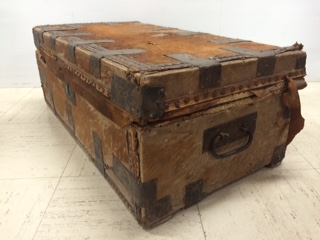 So, unfortunately for this moose, it didn’t get loose but rather became a unique trunk! There are many trunks of this size in our collection, but none of the others would have made a fashion statement quite like this one.