Physics on the Farm 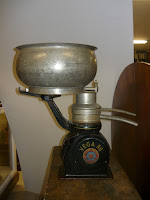 Possibly one of the most interesting tools on a farm was the cream separator.  Milk from cows was poured into the cream separator which seemed to magically separate the milk from the cream instantly.  When you look at it you wonder how can it just separate the liquid?  Here’s how:  using centrifugal force.  Who says you don’t need to know something about physics working on a farm.
Raw milk has a mix of big and small butterfat particles.  They’re held in a kind of suspension because they weigh more than other parts of the whole milk, kind of like mixing oil with water.  So, some lucky person got to stand by the cream separator and turn the handle on the side which caused the separator bowl to spin around really, really fast.  This forced the heavier milk to be pulled towards the walls of the separator while the lighter cream would collect in the middle.  Now the milk and cream could flow out of separate spouts into collection buckets.  This was way more efficient, faster, not to mention safer than having raw milk sit in a pan until the cream naturally rose to the top of the liquid. 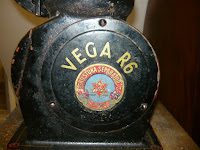 The one in the pictures from our collection is a Vega R6 model made in Sweden.  As you can see in the picture below, the handle has “65 per min” on it. 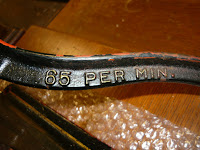 Cream separators are still used today, in fact, you can buy electric table top models for your own home.  Some old technologies really do stand the test of time. 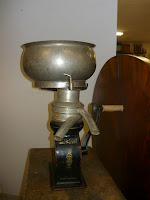 If you want to see a similar model in action, check out the YouTube video below.   No wonder people in by-gone years were more fit than we are today!
https://www.youtube.com/watch?v=lSHx2GckGdQ
Posted by Unknown at 11:42