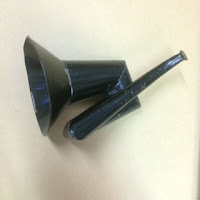 At first glance object 2014.002.154 resembles some sort of pipe, but upon further inspection you realize that it just can’t be a pipe. So what is the oddly shaped thing? It is one of the first versions of the fancy little pieces people now place in their ears in order to improve their hearing – a hearing aid!


Sometimes referred to as an ear trumpet, this artifact was most likely used in the 1800s and perhaps into the 1900s. The earliest record for the making and use of a similar aid is in the 1600s, with serious manufacturing beginning in the early 1800s. One man, Johann Nepomuk Mälzel, was designing ear trumpets for Beethoven around 1810. Similar to modern, electronic hearing aids that magnify sound waves for an individual, the ear trumpet would funnel the waves into its tube and allow for the sound to be louder – who knows how well these devices actually worked, especially for the severely hearing impaired! 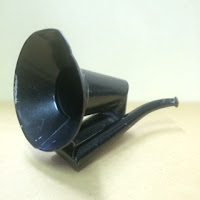 If there ever was a situation that the phrase ‘selective hearing’ applied to it would have had to have been when this hearing aid was in use. Unlike modern hearing aids that sit inside an individual’s ear and can typically be turned “on” or “off”, as well as have the volume changed, this aid would rely solely on someone holding it beside their head and placing the small tip into their outer ear. The excuse was surely used that someone hadn’t heard something because they hadn’t used the hearing aid, as it was too awkward or tiring to hold up to their head for a whole conversation. I probably would have opted to miss some conversations for the sake of not having to use this thing! 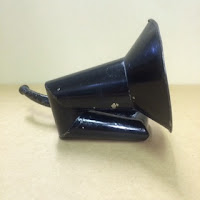 It is hard to imagine someone using one of these devices now, but that just goes to show another way in which our world has advanced. For everyone’s sake, it is probably good that these are no longer in use, as the improvements in technology, size and shape suggest these may not have worked the best.