When most people think of livestock they picture cows, pigs, and perhaps chickens, but not many people would consider foxes. This is likely because in recent years fox farms have not been nearly as popular as they were in the early 1900s. People have varying points of view on fox farms because the foxes were mainly bred for their fur for use in the fashion industry. It still is a part of our history, though, and so today we would like to share a bit about fox farming in the New Brunswick area with you. 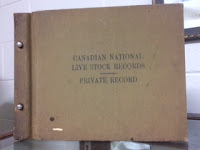 Discovered in our vault yesterday was a Canadian National Live Stock Records book that contains records for a fox farm in Millstream, New Brunswick from 1926 to 1930. It seems that the owner of the fox farm was John A. Northrup. Having seen horse and dog registration certificates, pedigree charts and sale papers, it was very surprising to find that these individual foxes had very similar papers to accompany their birth and sale.

The first page in the book is an ‘Agreement Re Marking Foxes’ signed by Mr. Northrup on August 16th, 1930 in Millstream, NB. The paper is addressed to the Accountant, Canadian National Live Stock Records in Ottawa, Ontario. The agreement contains details regarding the registration regulations, tattooing of foxes, and not holding certain groups responsible for any damage or loss during the marking or inspection of his ranch. The last sentence in the document, “At present my ranch contains 6 adult foxes and 10 puppies.” 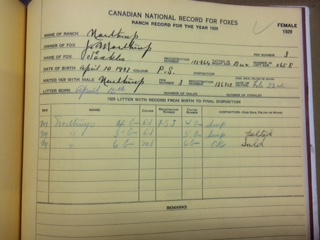 Most of the pages in the book are Ranch Records for a specific year that contain information about the puppies born and the parents. For example, a yellow 1929 page states that his female fox, Teakles, was mated on February 22nd, 1929 with his male fox, Northrup, and their litter was born on April 15th, 1929. The litter consisted of three male pups. Two were dark silver and their dispositions were described as “Susp”, the third was medium silver with an “OK” disposition. One was pelted, one was sold, and there is nothing listed for the third. 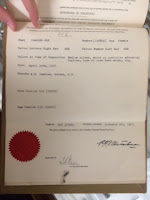 It isn’t the coolest artifact in our collection to look at, but it certainly tells us a bit about the history of our area. When this book was discovered we did some searching to find more information about this time period in rural New Brunswick, and we included the link to a website that goes into the details about fox farming in the Salisbury area.