We received some archival documents back from the New Brunswick Museum recently and they needed to be processed to be returned to our archives. Among them were these 200 year old documents, some in Sheriff Bates own handwriting, regarding the operation of the County Gaol. There are expenses claimed for handcuffs and chains and clothing for the prisoners, and an expense of moving a prisoner "out of the county" at a cost of 6 pounds. At this time the gaol would have been located in Kingston, which was then the county seat. It is not the same building as currently stands in Hampton, as that is the "new" gaol, built in 1840 and subsequently dismantled and moved to Hampton when the county seat was moved in 1870.
Sheriff Bates was a Loyalist who came to New Brunswick from Connecticut and spent many years as the"High Sheriff of the County of Kings". He is likely best known for his book The Mysterious Stranger, recounting the story of Henry More Smith and his time in the County Gaol. Henry More Smith was "a confidence man, master puppeteer, hypnotist, seer, liar, and above all else a superlative escape artist who lived for a while in New Brunswick, Canada. Chains, handcuffs, shackles, even made-to-fit iron collars could not hold him." (https://en.wikipedia.org/wiki/Henry_More_Smith). 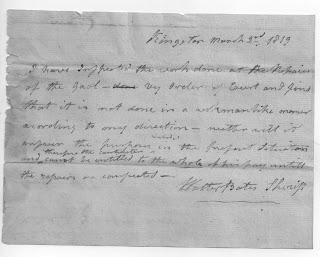 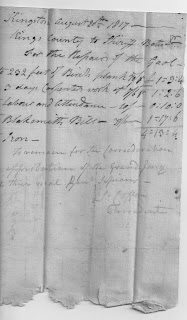 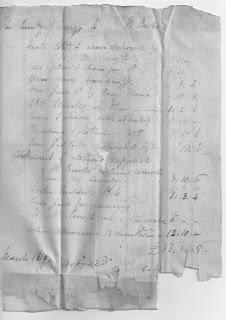