I'm always sad (or mad might be more accurate) when I iron which is why I avoid it as much as possible!  Ironing has always been a chore and historically, it fell to the women in the family.  It was a hot, difficult task as stoves in the home had to be going continuously, even in summer.  These irons had to be heated over a fire or stove but cooled very quickly when used, which meant ironing took even more time as the woman would have to wait until the iron reheated. 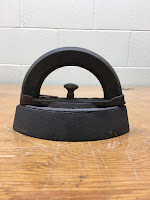 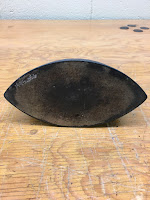 The iron in this picture if made of wood and metal and weighs about 5lbs.  Now it makes more sense to me why it is called a sad iron since "sad" is an old English word for "solid".

"Taylor Forbes" is stamped into the top of the metal iron on one side and "Guelph Canada" is stamped on the other.  There is also a "C" stamped on a raised block close to the end of the handle.  The bottom of the iron is very smooth. 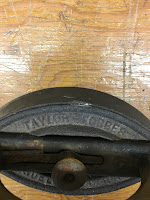 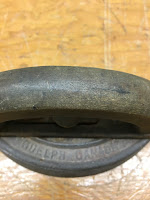 This design with two pointed ends was patented in 1870 by Mary Florence Potts from Iowa.  The design was a bit of a breakthrough in ironing technology because it allowed the ironer to iron both ways;  anything to make this chore easier was welcome!  In 1871 she introduced yet another evolution in irons:  ones with detachable handles which meant one iron could be on the stove heating up while the other was being used.  It may seem basic to us, but having a woman own the patent during this time period was huge.  Because it was so popular with housewives, it was widely marketed in magazines and local stores.

John and Adam Taylor and George Forbes created the Taylor Forbes company in Guelph, Ontario, in 1902.  They became one of Canada's biggest manufacturers of home hardware.  They sold the company in 1950 and within a few years it went bankrupt. 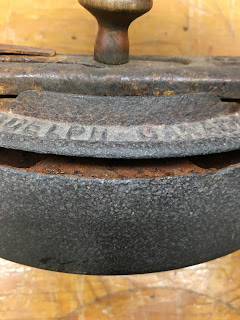 Ironing was such an important part of life that in the 19th century, They started disappearing in the 1920s as people began installing electricity in their homes, however, since many rural areas did not receive electricity until into the 1950s, many of these little sad irons were still widely in use.  Hmmmm...maybe I need to be more grateful for the easy electric iron I have to use from time to time.

Source:  museum information on the artifact and http://www.collectorsweekly.com/tools-and-hardware/sad-and-flat-irons.
Posted by Unknown at 17:04