These pictures are of a Russian Hussar Cavalry Officer's sword from the Seven Years War era (1756-1763). The sword is about 85.5cm long (about 33.5”) and both it and the scabbard are remarkably light.  The curved edge made it easier to fight the foe from horseback.  Light or not, it could still do some serious damage! 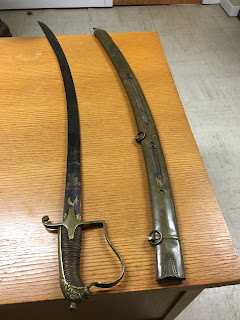 On the dull edge of the ricasso (the ricasso is the unsharpened length of blade just above the guard handle) there is an inscription left by the maker which roughly reads:  COANHRE which is Russian for Solingen.  Solingen is a city in Prussia where many such blades were crafted. 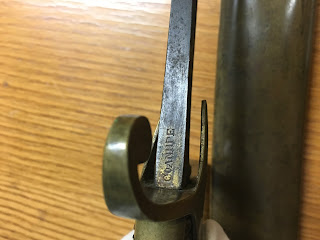 The hilt of the sword bears a plain back-strap that leads to a lion shaped pommel. 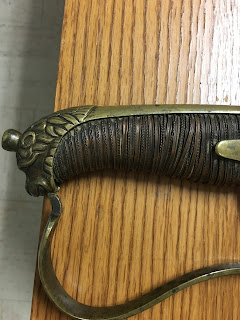 The hilt of the sword is made of wood and has been wrapped in copper wire, which is loose around it.  The blade is blued up to the last engraving and the scabbard is made of brass.  These types of swords were specially crafted for each officer. 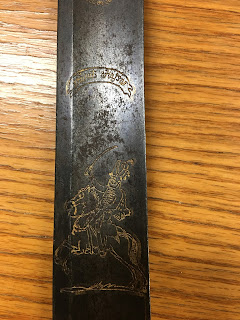 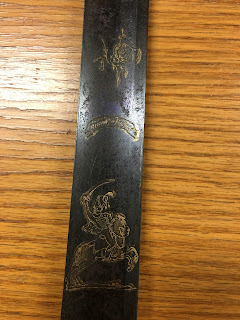 On the blade there are two mounted Hussars on either side with “Vivat Hussar” (Vivat is Latin for ‘Long Live’) above them.  These types of engravings are typical on Russian Hussar blades.


On the right side of the blade there is an engraved rose and laurel.  On the left side there is a sack of assorted arms and a water lily. 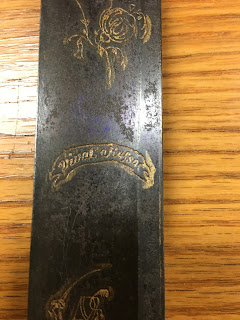 Most likely, a British soldier took this from a dead Hussar officer.   The skill involved in making these engravings on the metal is incredible.

For more information on the Seven Years War and its lasting effects on Canada, check out this link:  http://www.thecanadianencyclopedia.ca/en/article/seven-years-war/.
Posted by Unknown at 17:08