You know the old expression "lost my marbles"?  Well, I've often wondered what my marbles would look like if I ever did find them and I think that became a reality today!  There are about 104 marbles in this jar. They are all different colours, many of them multi-coloured and spotted.  They are made of a mixture of ceramic and clay, quite hard, and almost cold to touch. 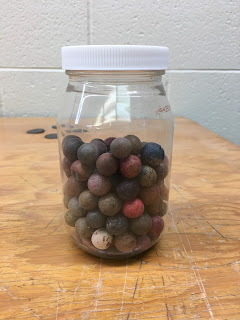 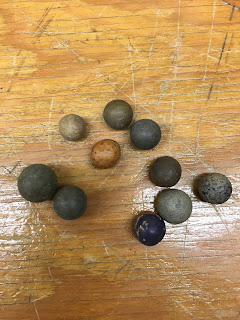 Most of them aren't quite round and have a few flaws, just as I thought my marbles would.  They range in size from about 1/2" to 1" across.  Marbles are mentioned as far back as Roman times, but these ones likely date from the late 19th century.  Clay marbles were made in Germany and the U.S. There have been some reports that clay marbles were used as ballast in ships sailing from Germany to America, then were sold.

Maybe that's why it's taken so long to find my marbles - they came from Europe!