Much as I love brownies, this one is for taking pictures not eating!  The Brownie camera came along around 1900 and was basically a cardboard box with a simple lens that took pictures on #117 film. The Eastman Kodak company - I'm sure lots of you out there remember Kodak! - created it.  It was a very simple camera that anyone could operate.  The original price was $1 which made it very popular. 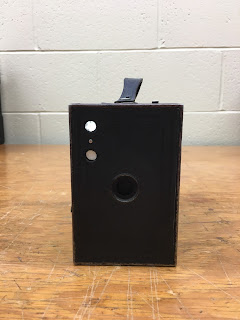 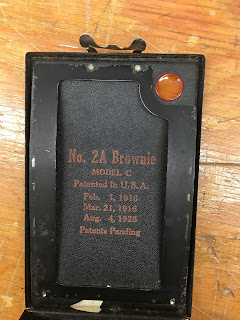 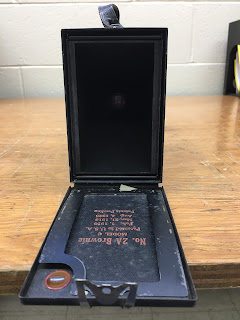 As with most things, the models progressed.  The model in this picture is a Brownie No. 2A.  It was introduced in 1907 and discontinued in 1936. The original price was $3.00 and over 2.1 million of the were produced from 1907 until 1921.  This model was made with a leatherette cover to protect the cardboard underneath.  It used #116 film, and the negatives were postcard size which was perfect for printing.  These cameras were also mass marketed to children.  It was so easy to use it actually put some post-card printing companies out of business because tourists could bring along their own cameras and take their own pictures instead of buying them. 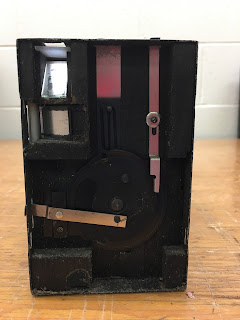 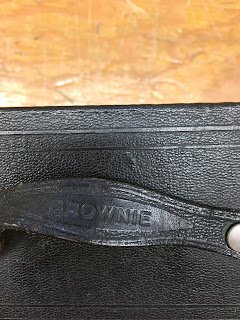 It has a handle on the top for easy holding and carrying and you can see "BROWNIE" stamped into it.


It's interesting how things progress:  Kodak put some companies out of business because it became so easy for people to take their own pictures.  Then Kodak eventually went under with the new digital world and people not having to print their pictures on film anymore.  We have some other cameras in our collection as well and the history of these little gadgets is a history of our own progression.  Interesting.

Email ThisBlogThis!Share to TwitterShare to FacebookShare to Pinterest
Labels: #116 film, 116 film, Brownie, Brownie NO 2A, Brownie No. 2A, Eastman Kodak