This stick was made for walkin'

Without my walking stick, I'd go insane
Can't look my best, I'd feel undressed without my cane
- My Walking Stick by Irving Berlin

Unlike Irving Berlin, today’s modern man would likely never fear for his sanity if he went out without his walking stick. But if this dandy was the walking stick in question, well maybe he would feel a bit bereft. 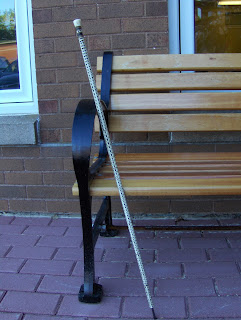 Today’s hidden history object is one of MANY canes in our collection. Irving Berlin was not kidding about their popularity; the quantity that have made their way to the museum suggest that every fancy man in Kings County carried one when he went out sporting (plus had two or three in the umbrella stand at home waiting in reserve).
The sticks in our collection vary widely; some were purely functional, others ‘commemorative’ gifts to mark a significant anniversary or milestone, while others like this whale bone model fall into the, “well…. that’s interesting?!” category.

This walking stick was brought to Saint John in the 1880s by a sea captain by the name of Jones. The stick is made of stacked whale vertebrae – 97 pieces in total- that are mounted over an iron rod. The iron sticks out at the bottom to provide a sharp tip for the cane. The head of the cane is made of ivory and joins the main body of the cane by a series of exotic hardwood bands.  This is one of two walking sticks owned by Captain Jones – the other is from the West Indies and has a large carved snake that curls down the shaft of the stick. 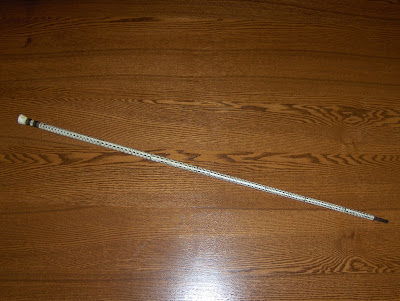 A seasoned rabologist (that’s the scientific name for a collector of walking sticks; and, yes, there is such an affliction) will tell you that walking sticks are the civilized evolution of sword carrying in the post-knight era. In fact, some walking sticks are known as ‘sword sticks’ because they hide a tiny sword or blade within the stick. We would argue, however, that the walking stick has a less elevated history, that they are simply the evolution of the stick (i.e. caveman club, Irish shillelagh, etc.).
The walking stick makes a handy support when walking (obviously), a great parter-of-bushes, tester-of-puddles and, in desperate situations, something to hurl willy-nilly if you are confronted by a wild animal. They are also a fine accessory for an evening on the town – especially if you've decided to wear your high hat, white spats and tails.

[Refrain:]
Without my walking stick, I'd go insane
Can't look my best, I'd feel undressed without my cane

Must have my walking stick 'cause it may rain
And when it pours, can't be outdoors without my cane
If I ever left my house without my walking stick
It would just be something I could never explain
The thing that makes me click on Lovers' Lane


Would go for naught if I were caught without my cane

If you are loving the lyrics, have a listen to a 1938 recording of the Irving Berlin classic by Louis Armstrong and the Mills Brothers here!