As we prepared for our exhibit on Kings County in World War I, we received a number of new artifact donations from community members. One such item was a WWI photo album held by the McLeod family of Penobsquis. The album is small in size – but big in detailed information. 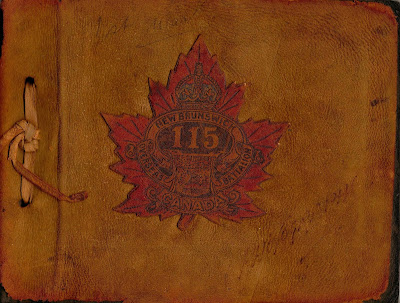 This small album features a leather cover with a military crest for the 115th Battalion; inside, the album contains photos of Arthur Norman McLeod and other soldiers from the Sussex and Penobsquis area. Most importantly, the album contains handwritten details about the soldiers depicted. 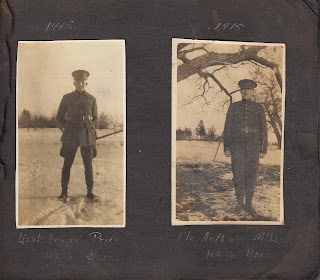 One of the biggest challenges we face with archival photographs is the lack of detail on who is in the picture. Some pictures donated to the museum collection contain names and notations but many more are mysteries to the original owners – and to us. That is why the McLeod album made such a welcome addition – the McLeod’s were great photographers and even better note takers!

The pages of the album show dozens of individual soldiers as well as groups of soldiers posed together and under almost every one, written with white pencil on the black pages, is the name of the soldiers, or the group they served with. Some photos are taken in Sussex and area before deployment, while others were taken overseas. We see soldiers of New Brunswick’s 104th Battalion, the 115th Battalion, as well as members of the Forestry Battalion at work with steam engines and horses. Each is a time capsule of information on this important period of history and its impact in our local communities. 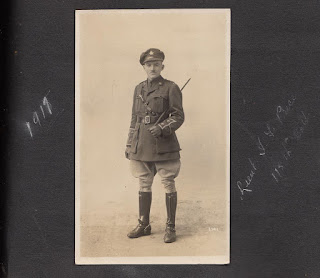 The album itself, after 100 years, is too frail to be handled by visitors so we engaged in a bit of technology magic and took images of every page (and the cover) and printed the results as a photobook that was placed within the display. To our delight, a number of visitors discovered relatives within the pages, connecting them in a tangible way to the exhibit and the story it tells.

A key story within the album is of one of the McLeod family's own. Pte. Arthur Norman McLeod was born in Penobsquis October 19, 1884, the son of Byron and Frances (Lockhart) McLeod. He enlisted on October 28, 1915 and served first with the 104th Battalion before transferring to the 26th Battalion. The album contains professional photos of McLeod in uniform, posing with his regimental colours, as well as casual shots of him with family and friends. What is not recorded in the album is that Arthur fought at Vimy Ridge and was killed in action at Passchendaele, November 6, 1917.

We are honoured to hold within our collection the memoriam card from Pte. McLeod’s service in Apohaqui, as well as a note from King George V expressing condolences to the family.  And we are especially honoured to hold the small leather photo album containing Pte. McLeod's image and those of other area soldiers. This treasure, cared for by a family for 100 years, is a fitting tribute to Arthur Norman McLeod and the sacrifice he made.