Too Hot to Hold

Grace Ganong married Willis Wanamaker on September 17th 1913. We have many pieces in our collection from the Wanamakers but two of the more unusual artifacts are Grace’s curling tongs! We have already documented one of the Wanamaker artifacts in our “Say Yes to the Vest” post -- Willis’ simple white wedding shirt -- so we thought it fitting to include something which Grace may have used on her wedding day to style her hair. Although if she did, she risked potentially burning her hair instead of curling it; not the prettiest look for your wedding day! 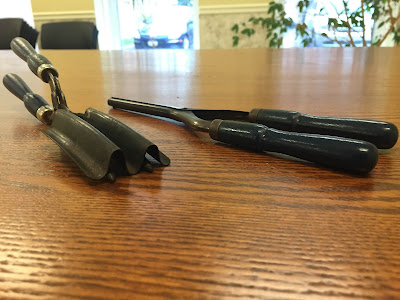 Curling tongs, also referred to as irons, have been found in Pompeii, in the tombs of mummies in ancient Egypt and in many societies throughout history. It is not certain who invented the curling tongs but Hiram Maxim, an American born citizen who lived in England took a patent for a curling iron, which resembled Grace's hair tongs, in 1866. Curiously Maxim also invented the Maxim machine gun, an asthma inhaler, and the mousetrap (Pitt Rivers Museum Body Arts, “Wig curlers and hair tongs”). Looking at Grace’s curling tongs, it is no surprise that the same mind was behind a mousetrap and a machine gun; they look like small torture devices, and that is without even heating them up!

A real danger with the curling irons and tongs was that they were virtually unchanged from around 1765 to the time Grace would have purchased hers, and so there were no improvements in the heating method. Women would heat them over the stove, oven or fire and try and get them to a ‘good’ temperature; too hot and you would literally burn your hair, the only remedy being cutting it off, and too cool and you wouldn’t get a curl. Luckily these tongs have woods handles so they would not have gotten as hot as the rest of the metal, but in the Victorian period some of their handles were of ivory or silver, which could have gotten very hot to hold (Pitt Rivers Museum Body Arts, “Wig curlers and hair tongs”). There were also many variations on the barrel design. Grace obviously wanted options and purchased two different designs, giving her different curling styles.

While providing us with a very interesting glimpse into the private lives of women from the past, and the means they had to use to achieve the beauty standards of the day, today’ mainly make us at the museum glad to be living in the 21st century and able to plug in our hair curling devices!

Thanks to summer staffer Lydia Blois for today's post!
Posted by Quilt Barn Tour at 07:58