A Passage Through Time


An earlier post showed some of Captain Davis’ belongings from his travels overseas, but they are only a few of the many pieces we have in our collection. We also have a cotton appliqué quilt, signed in ink ‘S. & M.E. Davis’, made by Captain Davis and his wife, Maggie, on their journey from Bombay, India in February of 1875 in the South Atlantic. The quilt is beautiful and colourful with a floral design on white background, and twenty blocks of four red flowers joined at the stems, as well as yellow and green patterns. Clearly Captain Davis’ skill in repairing sails could also be applied to sewing quilts with wife Maggie when she was travelling with her husband! 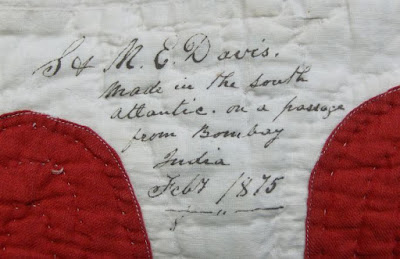 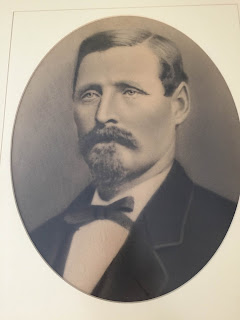 We also have a picture of the Captain and a reproduction image of the last vessel of which he was part owner, the Tobique. The framed photo of Davis includes an obituary underneath, stating that Captain Davis died in the 55th year of his life leaving behind his wife Maggie and five children Sinclair, Oscar, Percy, Wesley and Nellie. It also details his first voyage, which was very dramatic; it “was as supercargo on a vessel built by his father. On the return voyage the vessel was wrecked off Cape Hatteras and the crew escaped by clinging to pieces of wreckage until land was reached.”
Davis seemed to have a knack for getting into tricky situations on the sea, as he “next shipped in a barque bound for England and although young his coolness and courage were manifested when at the height of a storm the captain declared the situation hopeless. The vessel careened so Solomon took an axe and from her broadside parted the shrouds which allowed the spars to fall and the vessel righted thus saving all on board.” 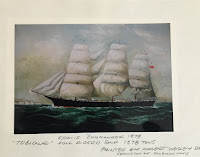 The Tobique was the last ship of which the Captain was part owner. She was built in 1876 and he sailed her for 15 years, mainly engaging in Pacific trade. It was not long after the Tobique that Davis retired; as John Keirstead notes in From A Seadog’s Logbook, “Capt. Davis retired from the sea after making only one voyage in a steam vessel. He did not think that steam was any way to travel, and he was a man of quite clearly stated thoughts.”

Life on the water was certainly changing for all sea-going adventurers as steam came to the fore. Remaining in the wake of this important era are some of the most unique artifacts in our collection – symbols of a time when iron-men and wooden ships set out to conquer the world, all from the gentle shores of Kings County.

P.S. We can only surmise that the Captain would not enjoy our planned exhibit for Summer 2016 that will focus on Steamships in Kings County!

Thank you to summer staffer Lydia Blois for today's post!
Posted by Quilt Barn Tour at 08:00