Those who love Kings County genealogy will be familiar with the Davis family; a loyalist family descending from Caleb Davis who emigrated from Wales to the United States, and finally to Canada circa 1783.
We happen to have a lot of artifacts in our collection from Captain Solomon Davis, a fourth generation descendant of Caleb Davis. He was a very interesting man who was a fixture of Hatfield Point until his death in January 1895. He was born on December 12th 1839 to Zebulon Southard Davis and Ann Dykeman. Davis married Maggie Edna Spragg on November 6, 1864.

Captain Davis traveled a great deal and had a very varied career, going to places such as China, India and Ceylon. He was also a Sea Fencible*, a unit created in Canada during the War of 1812 to protect exposed coastline from an attack. In Saint John, where Solomon Davis was found to be among the muster roll as a seaman, the Sea Fencibles were part of the Saint John Militia. Davis was also part owner of the ships he captained, which was very standard at that time. Being part owner of the ship meant that he was much more invested in his cargo. He was praised for being quick on his feet and courageous, as well as a good manager of accounts and cargo. 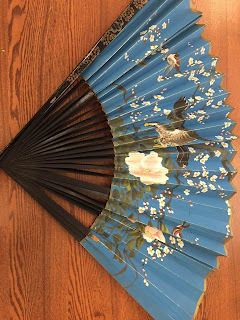 Throughout his varied career Maggie accompanied Davis on many of his voyages. On one voyage to China in 1870 Maggie purchased the beautiful (and enormous) handmade fan pictured above. It is two-sided, with one side showing flowers and the other birds. 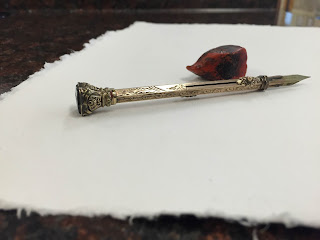 We also have Davis’ pen, an amazing instrument with two different nibs that can slide out for use; the picture at right shows the piece with the pen nib in use. Once the pen nib slides back in place, a second slide mechanism deploys a pencil point.

The bottom of the pen is also a functional feature: engraved in the end is Davis’ seal - the letters S and D entwined - which was used to imprint wax seals on his letters. An elegant yet practical bit of kit for a man who combined elegance and practicality himself. 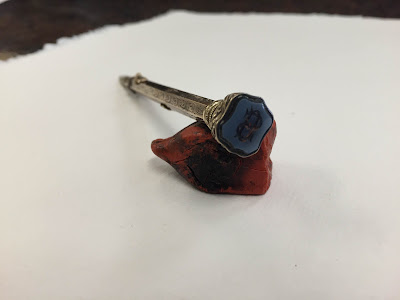 ** “From A Seadog’s Logbook,” written by John Keirstead in two parts in the The Weekend Showcase, December 1966

Our thanks to summer staffer Lydia Blois for writing today's blog post!
Posted by Quilt Barn Tour at 13:22