A River Runs Through It

Many of you have likely read – or watched the film adaptation of – Norman Maclean’s book “A River Runs Through It”. The elegiac work tells the story of Maclean and his brother growing up in Montana in the 1920s. In many instances the beauty of the book comes from the depictions of Maclean and his brother fly fishing. In Maclean’s words; "In our family, there was no clear line between religion and fly fishing." We think the same was true for William Venning. 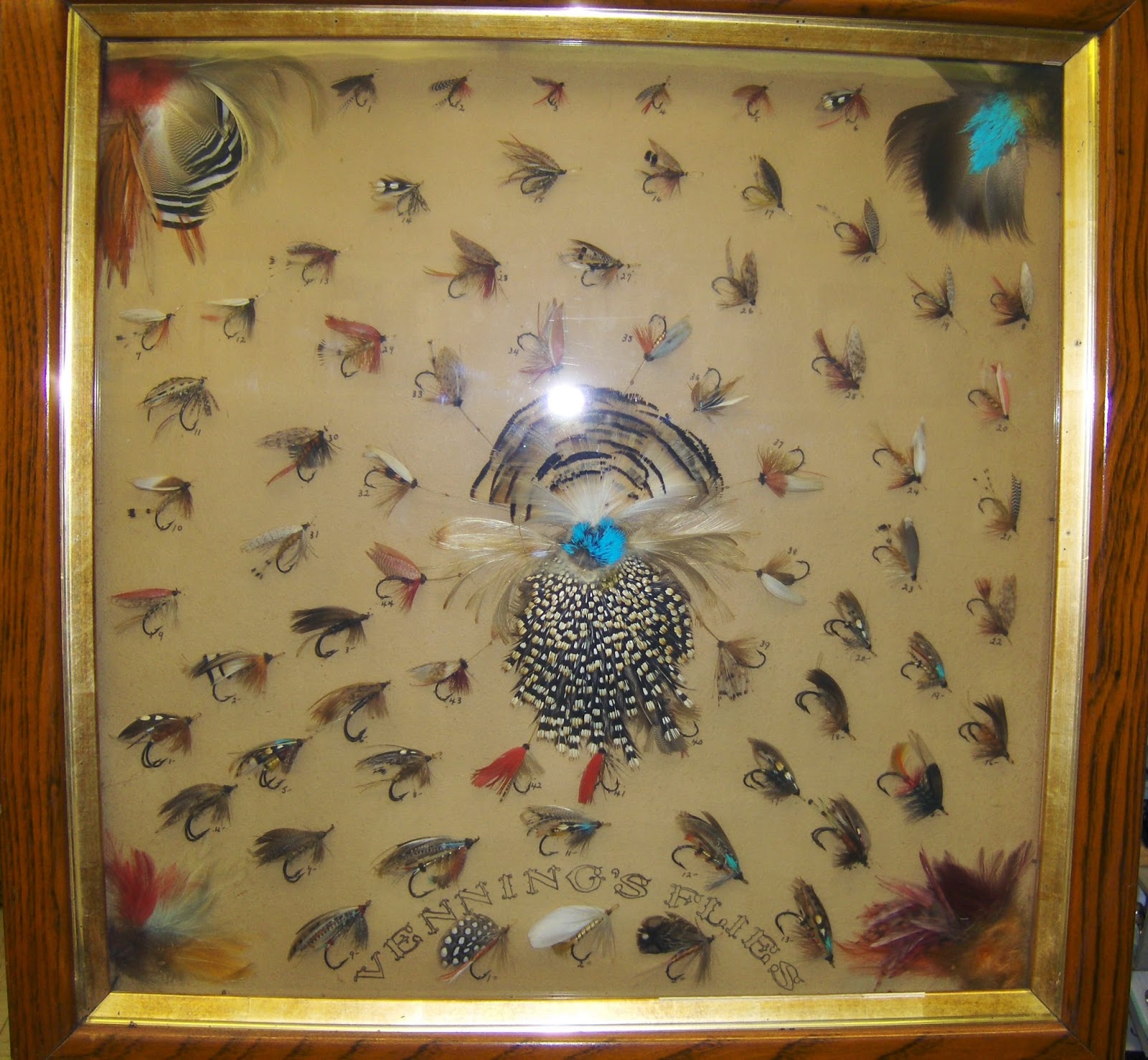 This beautiful collection of salmon and trout fishing flies were tied by William Venning in the 1880s. Each fly is a small masterpiece, carefully constructed of materials such as bird feathers, badger hair, horse hair, and wool. Vening was obviously a master of the art –even the placement of the flies in their frame shows a flair for the artistic.
Where did Venning learn his craft? He was born at Smiths Creek in July of 1822. Smiths Creek, like much of Kings County, is a place shaped by water. No doubt it was here that William Venning first tested his skill as a fisherman. This interest would lead to his becoming a great fly-fishing enthusiast but, more importantly, it would also lead him to become the first Inspector of Fisheries for the Maritime Provinces.

Venning held the post of Maritime Inspector of Fisheries for 22 years, from the late 1860s to the 1890s. He is an oft cited source in publications of the day throughout Canada and even in fisheries policy in the Northeastern US. He contributed to many of the early studies of Maritime waters and to early fishing policies.

Mr. Venning, however, was not always the peaceful fisherman by the still waters. In 1883 he managed to seriously ruffle some feathers when he was charged by three men – James Steadman, Edgar Hanson, and James Dewolfe Spurr – for trespass and assault. All three laid charges against Venning “for forcibly seizing and taking away their fishing rods and lines, while they were engaged in fly-fishing for salmon in front of their respective lots.” All three claimed riparian rights that allowed them to fish salmon on their property without a license. Venning obviously disagreed, citing an Order-in-Council of June 11th, 1879, in section 19 of the Fisheries Act which read: "Fishing for salmon in the Dominion of Canada, except under the authority of leases or licenses from the Department of Marine and Fisheries is hereby prohibited."


The matter went to the Supreme Court of New Brunswick where Venning was found guilty and assessed to pay damages of $3000 to Steadman, $1200 to Hanson and $1000 to Spurr. The amounts are staggering – those must have been some pretty incredible fishing rods and lines. The matter did not stop there; it was taken to the Supreme Court of Canada. They too found Venning in the wrong but they all agreed that the damages assigned were excessive:
The damages here are entirely out of proportion to the wrong. No actual damage was done, except in the case of Spurr, by the seizure and taking away of the rod and the slight injury to the plaintiff's thumb in a struggle, which, according to the evidence of Mr. Burbidge, he engaged in as a practical joke. The whole proceeding seems to have been formal, and to have been so understood by all parties. Nothing like contumely or insult is complained of. The exhibition of a pistol, mentioned in the cases of Hanson v. Venning and Steadman v. Venning, was wrong, but even in these cases, too, the whole matter seems to have been preconcerted and understood between the parties.


Slight injury to a thumb… and possibly the appearance of a pistol?  That is a serious commitment to salmon no matter how you look at it.
Despite this misadventure Venning continued in his role as Fisheries Inspector for the Maritimes for several more years. The donor of this artefact believes it was towards the end of Venning's tenure that he created this particular arrangement of flies. The donor noted that the piece hung on the wall of the family home, “Hillcroft”, throughout her childhood, moving with her several times in later years. It was during one of these moves that the ‘key’ detailing the name of each carefully numbered fly was lost. Thankfully, we have a wonderful fly tier in our neck of the woods who has helped us identify some of these beautiful pieces (thank you Don Logan!); but even for experienced eyes, some of the flies defy identification – possibly because they were Venning’s own creations.


Fishing flies developed by a careful eye, a steady hand... and a lifetime of experience on the rivers of Kings County.
﻿