Every parent knows how hard it can be to get their kids out of bed.  Mozart’s father Leopold came up with an ingenius idea.  When the young Mozart refused to get out of bed, Leopold would go to the keyboard, start playing a scale, then never play the last note.

Hum the scale to yourself – do re mi fa so la ti …….Do it a few times.  It will drive you crazy!  Imagine what it did to a musical genius like Mozart.  He got out of bed, came to the keyboard, and just banged on that last note! 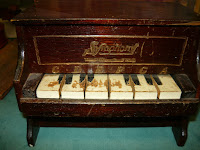 Our little toy piano is only 5.5” tall, 7.5” long, and is made of wood and covered with stain.  It only has 6 keys:  C D E F G A.  No B or second C to make a full octave. I wonder what Mozart would have thought of that!  When the keys are depressed, a flat metal piece is moved to make the sound.  The pieces of this little piano are put together with tiny nails and glue.  The sound is surprisingly good; not tinny sounding at all.

In this picture below, you can see Symphony Tuned International Pitch C D E F G A painted in gilt on the piano.  Some of these little pianos were elaborately decorated and made interesting conversation pieces in homes. 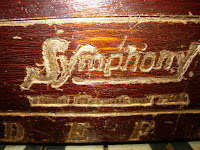 Toy pianos first made their appearance in Germany in the mid 19th century.  One that has endured until this day is the Schoenhut Piano Company founded by Albert Schoenhut from Germany.  He was the first to make these little pianos with individual keys connected to hammers that struck a glass sounding bar.  He eventually made the sounding bars out of metal, which is what the sounding bar in this little piano is made from.  In fact, the Schoenhut Piano Company which Albert founded, continues to make toy pianos to this day.  They still offer models based on designs from the 19th and early 20th centuries as well as offering new models.  Did you ever have a musical instrument as a toy? 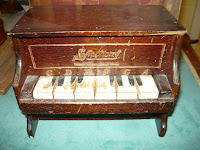