So, say you feel the need to brush up on your math skills.
You could practice your multiplication facts with an app on your iPhone (yes, there is an app for that). Or you could go old school and pick up some flash cards from a school supply company. But maybe you’d rather go REALLY old school, like Catherine Musgrove, and create an artistic rendering of the multiplication tables, carefully laid out in quadrants, hand drawn in pen ink, and embellished with flourishes that would make Her Majesty’s Court Calligrapher weep with envy. 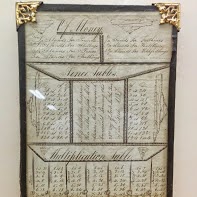 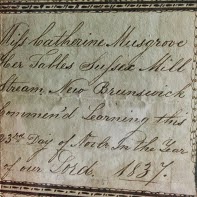 Today’s beauty is a page taken from the practice book of Catherine Musgrove, dated November 23, 1837.  Catherine was born July 17, 1825 in Millstream, Kings County, N. B., the daughter of Thomas Musgrove and Elizabeth Slipp. That would make Catherine just 12 years old when she created this minor masterpiece. The center block records, "Miss Catherine Musgrove Her Tables Sussex Millstream New Brunswick Commen'd Learning this 23rd Day of Novbr In the Year of Our Lord 1837". It would seem Catherine ‘commenced learning’ with a gusto only seen in accountant-savants. 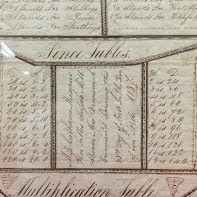 The page contains a bit more than multiplication tables; two other sections titled "Of Money” and "Pence Tables" add to the document’s interest. Canada had a rather shaky start when it came to currency. The early days of our history show a people divided by money – or at least by what form of currency they wanted to use. The debate over dollars and cents vs. pounds, shillings, and pence went on for a long time (only resolved by the Uniform Currency Act of 1871). And even in those parts of the country that chose the British system, the value placed on each was... shall we say, creative? So extra kudos to Catherine for knowing the system in place in New Brunswick at the moment.

Interestingly, accompanying this donation to the museum was a letter written by Catherine’s grand-daughter, Alta (McLeod) Patterson, recalling how she was given the piece by her grandmother 60 years earlier. Alta commented “I never could understand why Grandmother was just beginning her tables in 1837 as she would be twelve years old then?” Here at the Museum we are more astonished by the beauty and effort put into the document.

But, then again, multiplication facts have never been our strong suit.

For an interesting overview of Canadian currency (stop laughing, it really is interesting reading), check out the pdf History of the Canadian Dollar by the Bank of Canada.
Posted by Quilt Barn Tour at 13:00