TIP OF THE HAT TO YOU


We have some amazing textiles at the Museum. At the moment only a few are on display, such as this amazing black and gold beaded cape. It is designed in a three layer arrangement from the neck down, each having its own beaded border and tied at the neck with ribbon and two hooks. Beside it is a top hat, plus the hat box in which it would have been stored. During the 19th century the top hat became symbolic of urban respectability and was widely adopted when Prince Albert began wearing them in 1850.
It is easy to forget that in earlier times there was considerable wealth in Kings County and such lovely items were worn by local ladies and gentleman during the 19th and early 20th century.
SPOILER ALERT: Next season we hope to exhibit a wider selection from our textile collection. 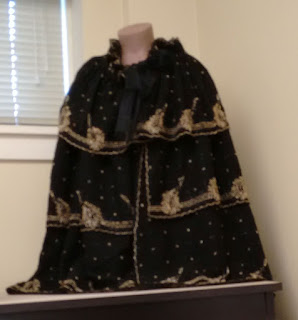 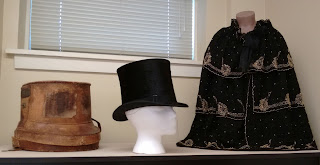