The Elephant in the Room

I've heard the expression "the elephant in the room" more times this week referring to more news stories than I could shake a tusk at!  But this article really is about the elephant in the room.  We have in our collection a Schoenhut elephant.  This little toy stands about 8" high, is made of wood, and was part of a larger collection of late 19th, early 20th century toys from the Humpty Dumpty Circus. 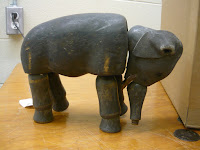 The eyes are made of glass and the ears and tusks are made of leather.  This one is missing a tail.  It's painted gray with a red mouth, and you can see from the wear that this toy was well played with once upon a time. 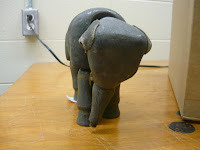 Being made of wood, it's a very solid toy and weighs about 1lb. This is a toy made to last. 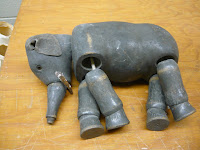 The legs and head are detached, being connected to the body by a sturdy cotton cord.  This makes it possible to move them so the elephant can be poseable.  The legs are spool style. 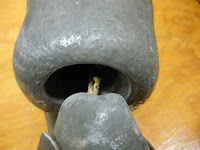 Albert Schoenhut was a toy maker from Germany who came to Philadelphia in the late 1800s.  He worked at a department store called Wanamaker’s making toy pianos.  He used metal bars in the toy pianos instead of glass ones, which really improved the sound.  Eventually, he left the store and opened his own toy manufacturing company.  Starting with making many different types of toy pianos, he eventually started making the Humpty Dumpty Circus. This became one of his most popular products and was exported around the world.  An advertisement of his circus is seen here. 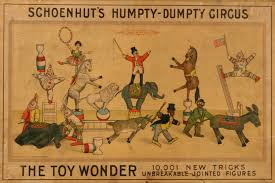 Christmas is coming and what would it be without toys.  Our collection includes a Schoenhut elephant!  These toys were really popular during their time, but, in the Great Depression, not many had money to buy toys and eventually his company declared bankruptcy. Wouldn't it be great to have the entire circus collection?
Posted by Unknown at 15:47