Not Your Local Beauty Cream!

Can you imagine having a job where you are given anti-gas ointment as part of your standard equipment?  That’s exactly what soldiers in World War 2 had!  Although gas masks were the number one defence against a gas attack, particularly mustard gas, more was needed. 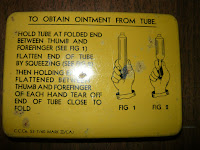 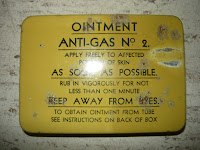 The yellow tin of Anti-Gas Ointment No. 2 is small and easily fits into a pocket.  It’s hinged on one side and contained 8 tubes of cream.  This particular tin has 7 tubes.  Whether they were unused because they weren’t needed, or unused because the person who had them was not able to use them, we do not know. 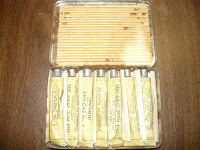 The instructions on the tin are very clear; the front of the tin tells you what it’s for and the back has clear instructions on how to get the cream out of the tubes.   The tubes themselves have directions as well - probably good because if you're in a panicked rush, you probably aren't reading the tin! 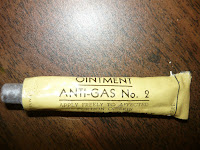 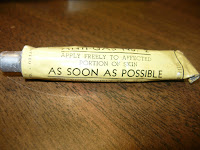 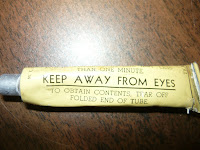 If you were gassed, you had to wipe off the residue as quickly as possible then get the cream on your body right away.  Being exposed to mustard gas was expected, and this cream has a strong alkaline content which helps neutralize the gas residue that would end up on someone’s skin.  Rubbing the cream on your skin would not prevent gas burns, but would lessen them. 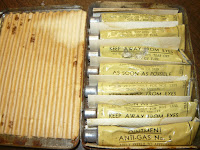