Today’s hidden history highlights an artifact that, unfortunately, we don’t know much about. This fire alarm box was donated to us in the 1960s by a gentleman from Sussex. We can only assume that it was used somewhere in this area of New Brunswick, or that this gentleman happened to pick up the box during his travels. What we can tell you about is the history behind fire alarm boxes in general and how they were used. 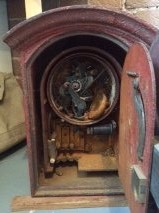 So, what would you do in the event of a fire? Once you realized there was a fire and you could take action, it was important to seek out a red box like ours. Our box has its own instructions in raised letters on the front – “For Fire, Break Glass, Open Door, Pull Hook Down and Let Go.” When triggered, an electrical pulse that related to the box’s specific number was sent out to fire headquarters. The headquarters would then react on their end, and if all went as anticipated, the fire would be responded to and, hopefully, all would end well – or as well as it could following a fire.
If anyone has any information on the history of these fire alarm boxes in the area we would love to hear from you!