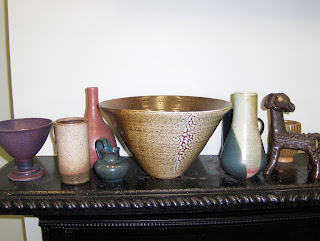 The Deichmann pottery, which they named Dykeland, in reference to the dykes on their property at Moss Glen, was created by Erica and Kjeld Deichmann. Erica and Kjeld met in , and were both of Danish origin. Erica had been born in to Danish parents, while her father was the pastor of a . The family moved back to when Erica was six, only to move to when she was a teenager. Kjeld moved to is 1927, drawn by the promise of large open spaces, not found in , and the fascination with at the time amongst Danes. From Alberta Kjeld moved to New Brunswick and purchased a farm house at Moss Glen on the Kingston Peninsula, and in April 1932 Erica moved back to Canada and married Kjeld in Saint John.
The original plan had been to farm and they began by raising chickens, but when their cellar flooded they discovered clay, and with the discovery of clay they decided to change course and begin making pottery. They first went back to for a year where Kjeld apprenticed to a potter and Erica did weaving. The Deichmanns took months of experimenting to finally make pottery they saw as fit to sell. In the beginning they broke hundreds of failed pieces of pottery. They also spent untold hours developing their own clay by combining theirs with other Maritime clay, while Erica also made her own glazes. The making of their own clay and glazes was a defining feature of Deichmann pottery, as most potters used premade clay and glazes. Despite their rocky beginning with pottery, within five years Deichmann pottery had won awards at places such as the Canadian National Exhibit and had traveled to and . 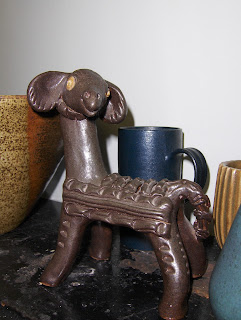 The Deichmann pottery was also known for its pieces with a ‘pebble glaze’, as well as Erica’s creation of the ‘goofus’, a llama-like creature that Erica was famous for making. The name did not originate with Erica but was thought to have come from Malcolm Morley, a visiting English journalist.
Their house in Moss Glen became a hub for artists and friends to gather. It also became a great tourist attraction, which only increased when they moved to . They moved to a heritage home at 34 Sunnyside Drive, which had a history of its own; it was constructed by William Roach a Sussex farmer in 1859, and then was purchased by Geroge L. Slipp, and the house remained in the Slipp family until 1948. Kjeld and Erica moved with their three children in 1953. There were two large showrooms at the front of the house where visitors could watch Kjeld make pottery.
Kjeld died in 1963 and Erica remarried Lieutenant Milton F. Gregg in 1964. Interestingly enough, Lieutenant Gregg has a link to our current exhibit, “Though Your Lads are Far Away,” an exploration of  Kings County during the First World War. Lt Gregg was from Mountain Dale, and was awarded a Victoria Cross for his actions at during the First World War. To find out more about Lt Gregg come visit us at the Kings County Museum. Summer hours are here and we are opened Monday to Friday 9 to 4 pm!

Special thanks to summer staffer Lydia Blois for this post!